Just a GIF of some gorgeous chocolate colored rabbit doing a binky...

Ok, so its not much, but that's how I "play". Although the Slave should've had the camera out earlier when I was "playing" with all four paws. (Can I help it SOME bunny jumped down for treats?) I mean, the Slave should've gotten off the couch faster with the camera in order to capture me playing with all four paws. (*Coughs*)
This time I was jumping on the piano in search of the mysterious Dandelions. The Slave has been picking Dandelions from our backyard (For more goody bags for Adoptables in July)and then drying them on top of the piano...The one place I can't reach. She used to have them on the piano bench, but after I discovered them (AKA pulled them off the piano bench and scattered them...) she moved them; so I have been searching for ways up on top of the piano. So far, I've been unsuccessful. Oh well. We'll see what tomorow brings. In the meantime though: 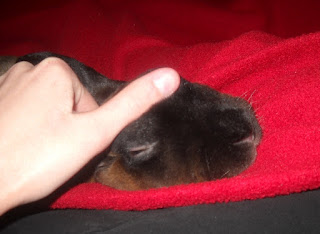 I'll sit back, relax, and enjoy the head rubs that are helping me think of ways to get onto the piano...

I Just Couldn't Control Myself

The Slave caught some pretty interesting pictures while I was running around, doing my normal.
The Slave has always been impressed by my amazing binky skills, but today she was really impressed after looking back at this one picture she took. 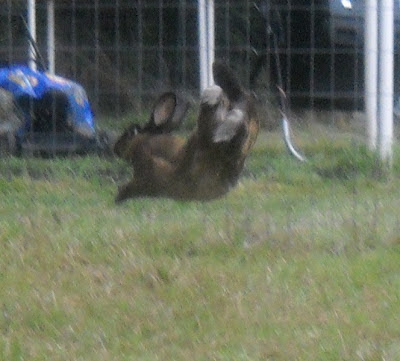 Anyway. She also caught some other semi-decent pictures of me in action as well: 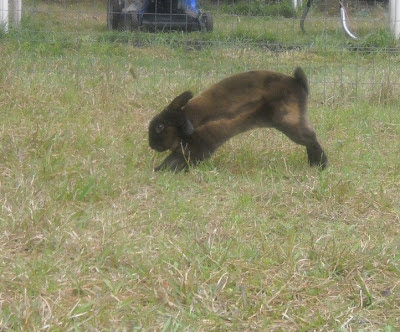 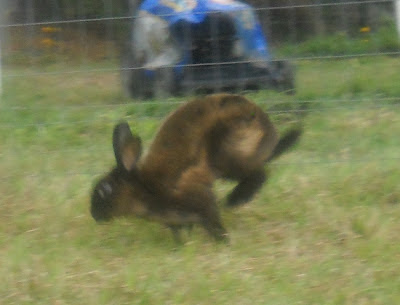 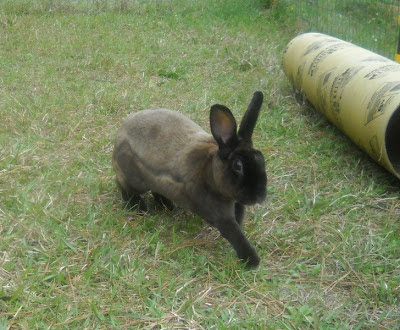 So I had a nice run time. Nothing better than a good romp outside. (Besides a never-ending bowl of greens...)

Duchess to the Rescue! 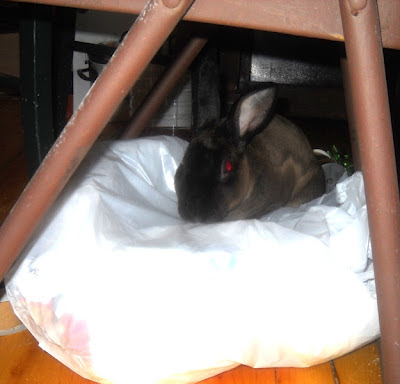 Who knew Plastic bags could be so much fun!

On my usual Morning Quest, I discovered plastic bags. Not only are they fun to sit on, they are also fun to dig on.

I also initiated operation DOFI (Discovering of Forgotten Items) on this Morning's Quest.

While the Slave was making my morning salad, she thought it odd that I wasn't dancing around her feet looking for food. Soon as she finished, she came looking for me, and this is what she found: 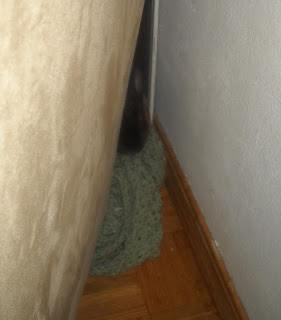 I've been working on digging the blanket out from behind the couch. It fell back there a while back, but no one bothered bringing it out since its a very holey blanket. Not very warm. So I've taken it upon myself to rescue it.

The Slave also heard me knocking something against the couch, so she went to find out what it was. It was a spoon. She still doesn't know how it got there.

All I know is I've found two items this morning and I still haven't gotten my reward(s). 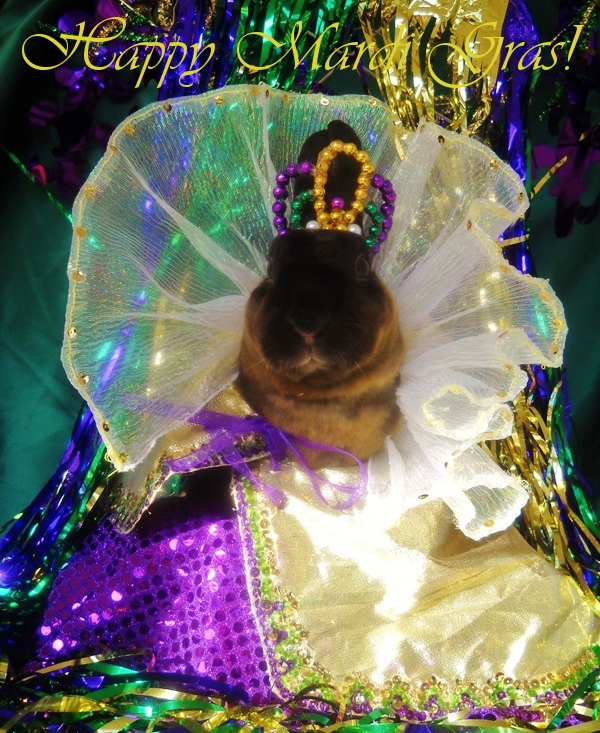 Now you must obey my every wish.

I thoroughly enjoyed the photoshoot for this card...I must've eaten about 5 bunny bites! The Slave said I was very well behaved this card; she said that the set gave her more trouble that I did!

My wonderful Auntie made me my cape, here's another angle of it so you can see the Fleur De Lis: 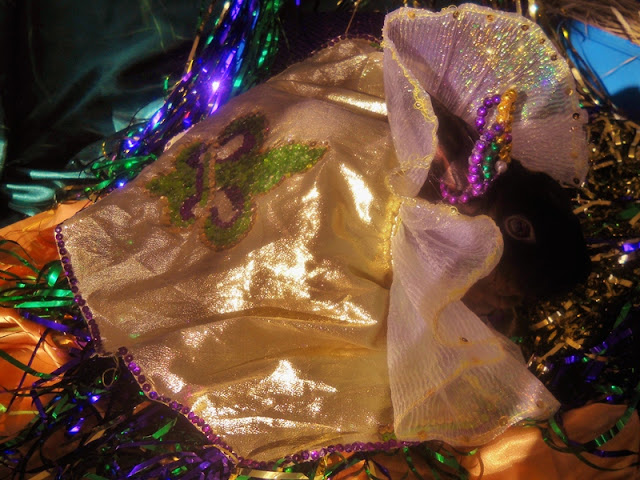 Isn't it lovely? And I can move around in it too! The Slave made my crown, which is a nice accessory. They were very happy with how my first Mardi Gras card came out!

Hope everyone has a great Mardi Gras day!

(Oh, and you can check out my Mardi Gras GIF here.) 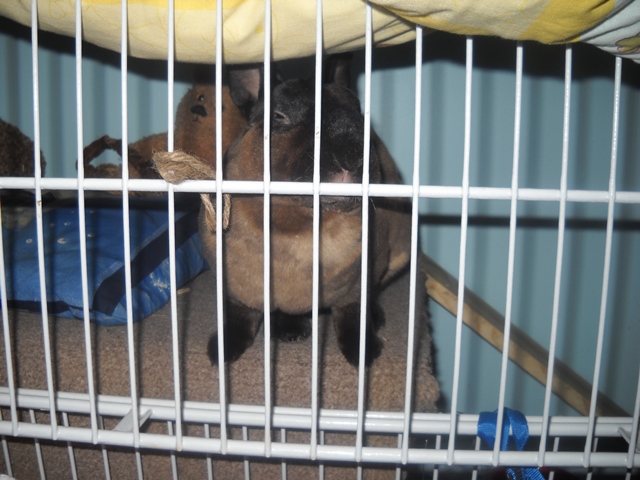 Just you wait till I get outta here...

This is what I get every night, just because I'm a bit destructive. Can I help it that the Slave needs to sleep? Please. Learn to sleep with your eyes open if you're that worried I'll ruin something!

Actually its not because you'll destroy something, its because you jump on the bed and leave me... 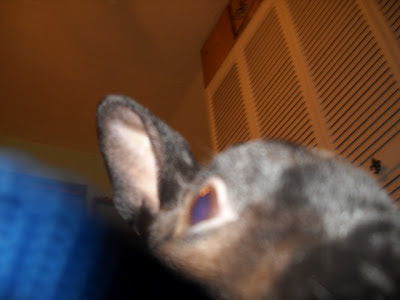 Were you going to say something?

I didn't think so.

Need a Little Chocolate for Valentines Day but Don't Want the Calories? 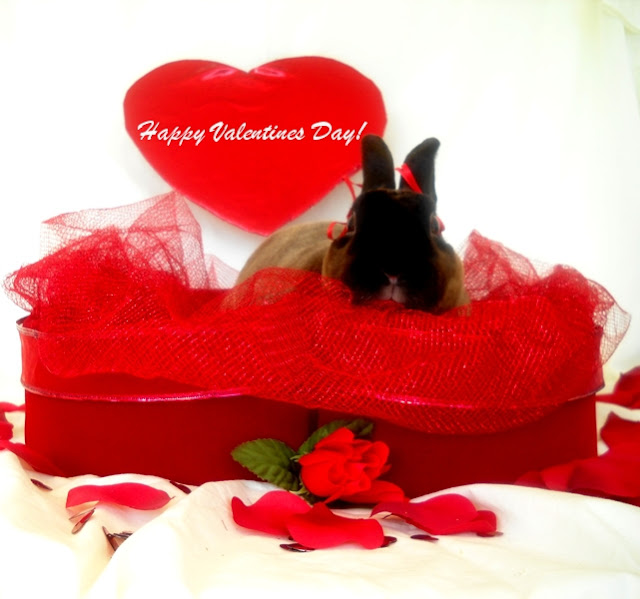 Then you've definitely come to the right blog!

Needless to say I've been getting tonz of pets and cuddles this Valentines day...(Oh, and the Slave has eaten around 6 little York Peppermint Patties so I don't think its because she "needs a little chocolate", hehe.) Since I am velvety soft and am extremely adorable.

While I don't particularily like being cuddled, I tolerate it. Although its usually only when the Slave holds me, since if I nip or try to get away from her, she just holds me even longer.

I had a great first-Valentines day here in my forever home; the Slave gave me some home-grown goodies with my dinner, and I also got a special goody bag filled with my usual delicious timothy hay and also some homegrown herbs, and some dried Dandelions! Since I love those so much, the Slave says she's going to pick a lot so that way I can have them dried even when they aren't in season.

I hope that everyone has had a great Valentines day!

P.S. Mardi Gras is coming up next week, so be sure to hop back over here next Tuesday!

What'd the Manatee Ever do to You? 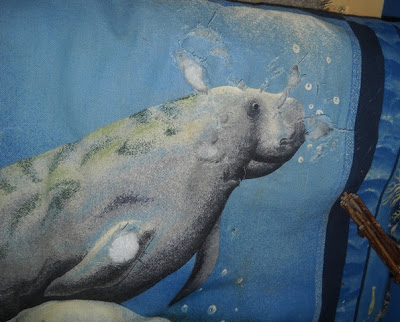 The Aftermath
Something finally snapped. For weeks that pillow has lain in that spot without so much as a pee stain on it...Until this morning.
Oh, she has plenty to chew on, but for whatever reason, today, time was up for the pillow. Sure, she's dug on it before, but this was the first time she's attacked it with more than just paws. 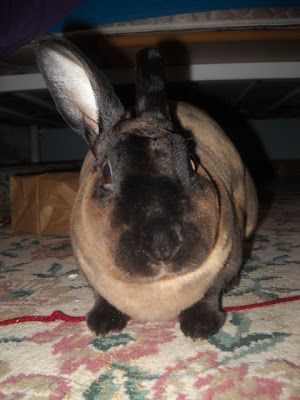 I don't know what you're talking about.
I put this pillow in her area since she's a bit attached to it (She grooms it fairly often.), and I've heard her dig on it before, but this was the first she's ever put holes in it. I of course knew this day would come, I just expected it a looong time ago. 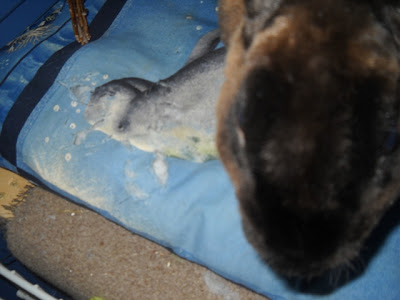 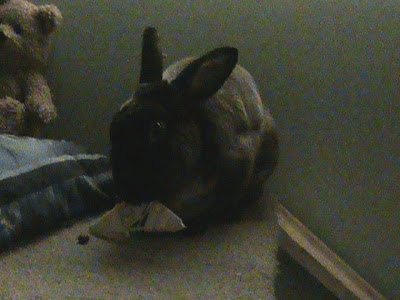 *Chew chew* Oh, you're supposed to eat it!

Apparently toys have another purpose besides getting in my way. So what if it took me longer than the average bun. The Slave gave me a vinestar for Christmas, along with some willow balls, and I only recently realized that you're supposed to eat them! Now I can say "Thank You!" and actually mean it!

The willow balls I demolished in January, when the Slave gave them to me.(She didn't give it to me at Christmas since I had other things to nibble on...That I actually didn't/haven't nibbled on.)

I finally realized then also that you could nibble the vinestars, but only the past few days have I done any real construction on that strange, pointed, delicious toy. Now all that remains are two points, which I'm sure I'll devour before the week is gone.

Now I can look forward to my birthday with this new knowledge on toys.

P.S. The picture looks horrible because the usual camera's batteries are dead, and the charger was, uh, taken care of by a certain rabbit. All that remains is the video camera, which also takes terrible pictures. 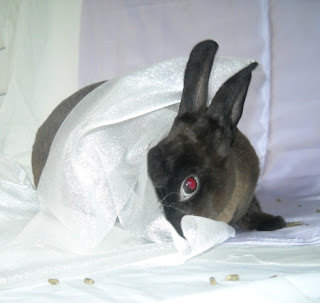 This afternoon Miss Duchess was running around, as usual, when we heard the sound of paper tearing in the kitchen. We didn't think much of it, we have a roll of newspaper in a corner that she will occasionally get into...We comepletely forgot that we had a package of flour sitting on the floor.
A few minutes after the paper tearing someone ended up going into the kitchen and discovered Duchess happily munching away on wheat flour. Surprisingly she didn't get much on the floor, or on herself, but she did leave a nice sized hole in the bag. We did manage to save most of it. With the "tainted" flour, well I guess I'm just going to have to make Duchess some more home-made treats.

What does this blog have to do with Flower? Nothing really. When I was flipping through pictures that one of her really reminded me of Flower from Bambi hiding behind his tail. (Surprisingly, I couldn't find that image Google.)

Things have been busy around here, the photo contest I sponsored on Bunspace ended, so I'm busy with making the prizes. I've actually been having fun with that since I'm getting to try to make new poses.

Duchess has also been sure to keep her area as messy as possible. (Including peeing off her platform and hitting the wall...

For the record, I was trying to get it in my litterbox, which by the way is directly underneath my platform!


Yes, Duchess, I know. It was all my fault for putting the litterbox under there. And hay on the platform. You can do no wrong.)

So I've been trying new ways to keep it clean over there. Right now I've got the lid of a tupperware container between her platform and the wall in order to prevent that from happening again. So we'll see how that works out.